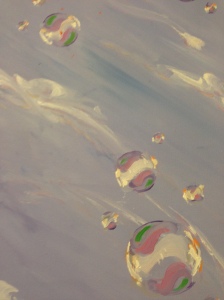 On the day of September eleventh thirteen years ago I painted a picture of bubbles. I was twenty-one, still new enough to life to miss the greater significance of the day. I’m still not sure why I painted bubbles. I think I was trying to understand something that was both incredibly fragile and surprisingly strong, something like innocence.

In the same vein, there’s always been something about wildflowers that resonates deeply with me. They are delicate, inclined to fail quickly when plucked and vased. And yet, they grow in those rocky windswept places and thrive in the unirrigated fields, propagating themselves on nothing but the wind.

San Francisco also continues to surprise. We went on a hike with some other Moms this week, a point on the map named Interior Greenbelt. I parked where I was told to, 17th and Stanyan.

But Google maps had already told me my destination was on the right and would not deign to repeat itself. I was in the middle of a residential neighborhood. There was no park fence, no signs, just homes. I looked around until I saw it, a small wooden stair running narrowly up from the sidewalk between two houses.

And this is what was on the other side:

Mt. Sutro is a eucalyptus forest crawling with blackberries, poison ivy, and red dirt right in the middle of the city.

This week I’ve been feeling a little mysterious to myself, discovering vast expanses inside me that I didn’t know existed. I’ve run into secret reserves of pride I thought were conquered; depths of resolve I didn’t know I had. And I am left feeling incredibly fragile and incredibly strong at the same time, like the bubble made of suds wrapped around air that somehow manages to make it past the gable of a peaked roof.

What a strange life this is. What strange creatures we are.